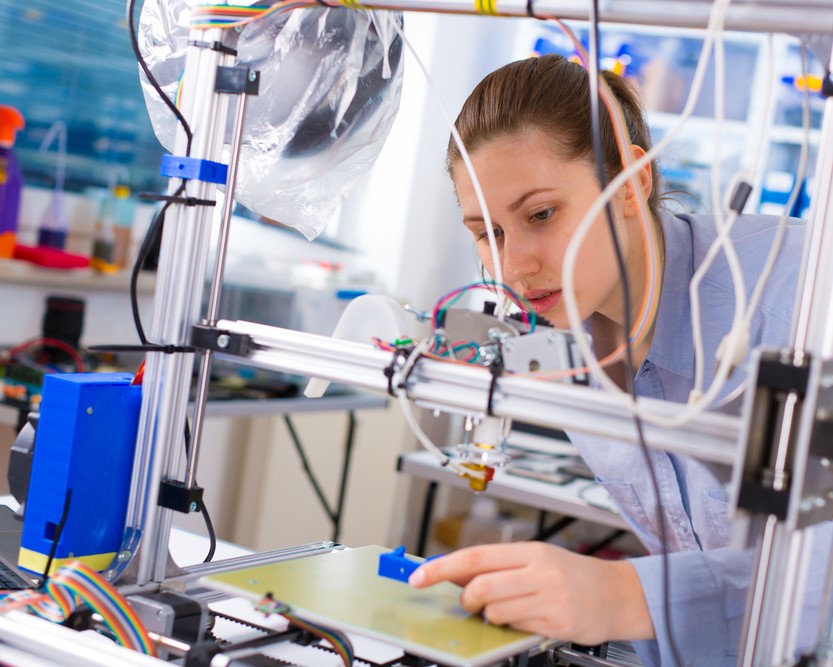 Advance social wellbeing via a prosperous, diverse and equitable economy with secure jobs for all who want them, while acknowledging and working within safe environmental limits.

Australian #unemployment dropped to 9.0% in November; the first month since February 2020 without COVID restrictions 💼👨‍💼

Unemployment in November decreased by 24,000 to 1.34 million Australians (9% of the workforce).

"AgriAus had more than 1500 applicants for farm work but was unable to secure even one of them a job due to farmers’ preference for foreign workers." The New Daily

"I have extensive experience in hospitality and fruit and veg supply, but the minute I tell them I have my own accommodation it is the last I hear from any of them... Mr Muir said several farmers told him flat out they won’t hire Australians... I’m not as exploitable as a foreigner.” The New Daily

"[With international borders closed and migrant labour unavailable, ANZ CEO Shayne] Elliott said the bank has launched a number of programs, including with the Victorian government, to encourage older people to return to the world of work as well as women." Yahoo Finance

"There are millions of Australians, according to these recent figures, not engaged in any work. To be precise, in February, 2.2 million were not employed and wanted to work... Of those 2.2 million, 808,000 were looking for work. This is the group that falls under the accepted definition of "unemployed". But the data also reveals 1.81 million did not look for work. That is, there were more than a million Australians who were not in work, could work and wanted to work, but did not look for a job. And over three-quarters of these candidates were available to start immediately or within four weeks." Australian Broadcasting Corporation

"A 1.5-tonne [large shipboard fitting] part manufactured in Adelaide has been certified, making it the world’s largest approved 3D-printed shipboard fitting and opening the door to a potential flood of new work." InDaily

"When the pandemic hit at the start of 2020, Med-Con was the only surgical mask manufacturer in the entire country.. The federal government begged Med-Con to boost its supply... Med-Con sprang into action, purchasing 10 new machines, hiring more than 100 staff... "But once pandemic pressures started to ease, health services rapidly returned to their overseas suppliers of old. And for [Australian mask manufacturer] Med-Con, business suddenly dried up." Australian Broadcasting Corporation

Sustainable Australia Party supports secure jobs via a more diverse economy. Within safe environmental limits, our economy should develop due to improvements in productivity, innovation, skills, education, workforce participation, technology and entrepreneurship, not the mirage of mining exports, housing debt and and rapid population growth.

"We already knew that real per capita wages & salaries have fallen by around 2% in the decade to March 2017." MacroBusiness

“Headline economic [GDP] figures, fuelled by immigration and mining exports, were instead hiding the fact that some Australian living standards were being eroded." News.com.au

“South Sydney, once the domain of the industrial juggernaut Goodman, is now dotted with high-density Meriton apartments... Where once [economically productive] 'office' or 'industrial' was the highest and best use, [unproductive investment in] residential is now commanding the big bucks.” The New City

To avoid even further deindustrialisation, we urgently need to reallocate Australia’s scarce economic capital (bank lending, superannuation fund investment, personal savings, etc). Capital should move away from our overinvestment in relatively unproductive land, housing and property speculation - and back into our factories, farms and small businesses, to re-diversify our economy.

"The latest Harvard Atlas of Economic Complexity ranks Australia 93rd, lagging Kazakhstan, Uganda and Senegal, and only just ahead of Pakistan and Mali." ABC

“Interventions that favour one industry can make the rest of the community worse off. The Commission has long argued that policies supporting particular industries [e.g. property] can have large costs in that they allocate resources away from the uses [e.g. factories, farms and small businesses] that are most welfare enhancing for the community..." InQld

Step one is to address the corrupting influence of vested interests who are driving politically engineered policies to favour the property industry - including property investment tax concessions, rapid population growth and foreign ownership.

It is a myth to suggest that Australia needs foreign ownership or even significant foreign investment. 80 per cent of total investment capital in Australia's economy is local, but too much of it is being 'misallocated' into relatively unproductive assets like housing.

"What the AFR’s phrase 'capital-importing Australia' obscures is that about 80 per cent of new capital deployed in Australia each year is formed right here. ABS data show that in the 12 months to March, new capital accumulated in Australia totalled $350 billion. Of that, [only] $75 billion was imported." The New Daily

Since Australia's population growth was tripled in the Howard era, per capita GDP growth has plummeted: 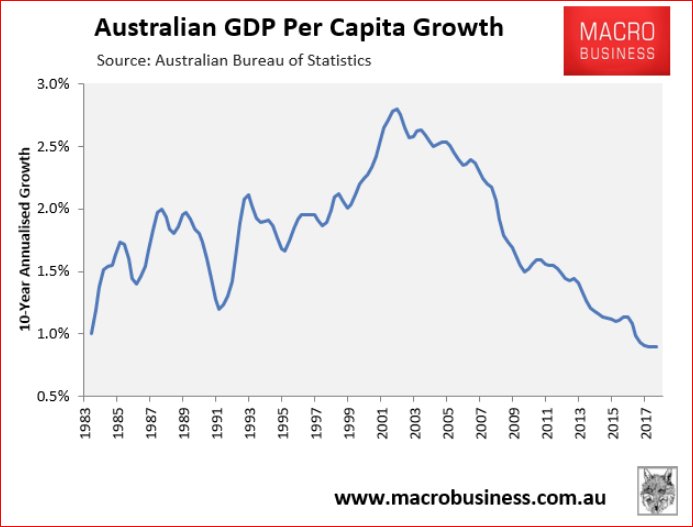 "Some advocates of high immigration claim that it raises the rate of growth per head... It is worth noting that the IMF data shows that Australia’s experience of high immigration has done anything but lift the economy: since 2013, when the Coalition was elected, Australia has had by far the highest rate of immigration and population growth of the big twelve, yet the third lowest growth in per capita output." Inside Story

At both federal and state level, successive Liberal and Labor governments are relying on this unsustainable overdevelopment and rapid population growth, creating a "real estate-driven" economy with "productivity going backwards" that is "setting the precedents for a really significant slowdown.” The New Daily

For too long economic success has been measured with the blunt instrument of aggregate gross domestic product (GDP) growth, including consumption and investment. In great part, this has involved the need to house, transport and service an ever-bigger population. Sustainable Australia Party measures Australia’s genuine economic progress by considering per capita economic growth against levels of household and government debt, job security and resource use. We also ask whether investment flows are being directed to those sectors that deliver improved economic security, lower risk and a better quality of life for all Australians.

Sustainable Australia Party is the only political party in Australia that recognises that surging population growth and housing demand, and the misallocation of investment capital and spiralling government debt associated with trying to manage its impacts, is a fundamental threat to our economy, environment and quality of life.

"Road congestion could cost the Australian economy $38.8 billion a year by 2031 if infrastructure spending fails to keep up with population growth." The New Daily

Importantly, ‘free trade’ agreements are leading to the narrowing of our economy. Specialisation and unsustainable cost undercutting create an ever-growing reliance on imports of many critical products and services. But outsourcing our economic security to foreign countries and trading partners leaves Australia extremely vulnerable to global shocks and overseas decision-makers.

Furthermore, to try to ease the congestion associated with rapid population growth and housing construction, governments are retro-fitting our cities with enormously expensive infrastructure like tunnelled toll roads. But our cities are now in ‘diseconomies of scale’, meaning each unit of infrastructure output is increasingly, and now prohibitively, expensive. This budget-crippling infrastructure is leading to growing debt and deficit, public asset sales, austerity, new taxes and charges, and per capita service reduction.

“It used to be easy to deliver infrastructure when the government owned the land, but because our major cities are already planned and built up, there is no room to retro-fit new infrastructure without expensive additions like land buy-backs and tunnelling." William Bourke

We also completely reject the myth that high immigration is required to either offset our gradually ageing population or maintain our economic prosperity.

"How many times does the Productivity Commission have to ­remind us that immigration is not a feasible countermeasure to an ageing population? It made this point in 2005, 2010, 2011 and 2016: Substantial ­increases in the level of net overseas migration would have only modest effects on population and the impact would be temporary since immigrants age themselves.” The Australian

A macro view of the global economy points to the superior per capita economic prosperity of relatively small populations, such as Norway and Singapore. According to the International Monetary Fund, seven out of the top ten per capita GDP countries have populations under 10 million. Larger and faster-growing countries, such as Bangladesh, Nigeria and Pakistan, are generally at the bottom of the per capita wealth table.

Again, Sustainable Australia Party is the only political party in Australia that recognises that surging population growth, and the misallocation of investment capital and spiralling government debt associated with trying to manage its impacts, is a fundamental threat to our economy, environment and quality of life.