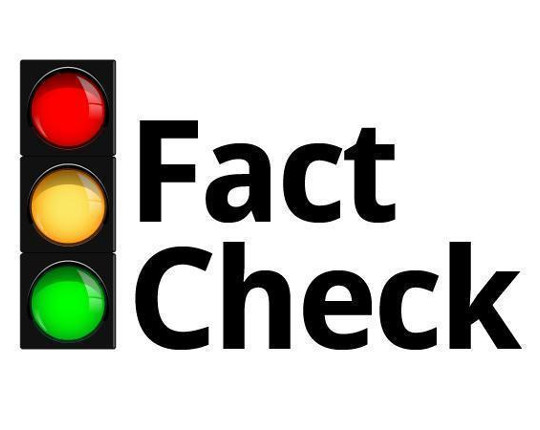 And who can forget Greta Thunberg memorably referring at the United Nations to “the fairytale of endless economic growth”? Yet this endless economic growth appears to be the main reason that successive federal governments and business lobbies want population growth – so they can point to a headline GDP 'growth' figure.

Before I decided, after over 40 years as a member of the Australian Labor Party, to leave it and join Sustainable Australia Party, I did plenty of due diligence. I found both its Founder, William Bourke, and its members to have no xenophobic instincts whatsoever. They like Australia’s multi-racial society, and know that we are pretty much the most welcoming country on earth, with one quarter of our residents born overseas and one half with one or both parents born overseas. They support a non-discriminatory migration program – but one that is sustainable – at the long-term average of 70,000 per year, and which does not lower our refugee intake.

They agree with the Nobel Peace Prize winning economist Joseph Stiglitz, who pointed out that our key economic performance indicator, GDP, totally fails to factor in climate change. They want action on climate change, and cannot see this happening while our world continues its path of rapid population growth. They are horrified by the impact of drought and fire on our landscape. They are dismayed by the fact that both global and national population have increased by over 50% in the past 50 years, while our wildlife has shrunk by the same amount.

They also think that rapid population growth is bad for ordinary Australians, fuelling overdevelopment, job insecurity, wage stagnation, housing unaffordability, traffic congestion, the destruction of our tree cover, and the loss of a say by ordinary people in the character of their cities and towns.

So I joined them, and I hope you will too.

The Hon. Kelvin Thomson served as an Australian Labor Party Councillor for the City of Coburg from 1981 to 1988, Member of the Victorian Parliament for Pascoe Vale from 1988 to 1996, and Federal Labor Member for Wills for over 20 years from 1996 until the 2016 Election.

Amongst the 20 policy areas covered by Sustainable Australia Party, we campaign to slow population growth by returning Australia's annual immigration program back to the twentieth century average of 70,000 (in a non-discriminatory way, with no impact on our refugee intake). We are therefore for immigration, but at the more traditional intake level.

As explained by sociologist Dr Katharine Betts, many 'intellectuals' or 'chattering class' influencers in our society automatically equate any criticism of high migration with racism. Along with "bipartisan support for high migration" from the Liberal / National and Labor / Greens federal governments, and "a vocal and cashed-up growth lobby" (banks, property and infrastructure industries, commercial media, etc), "there are few openings for effective dissent."

For our policy on population and immigration sustainability, during recent election campaigns we have had to put up with a variety of false and damaging assertions, including that the party is ‘anti-immigration’ or 'racist'.

These malicious smears have been most prevalent on social media and have come from a variety of sources including competing party supporters, members, candidates and officials (particularly The Greens, but also Labor) - and even influential current and former journalists!

Here are some examples. 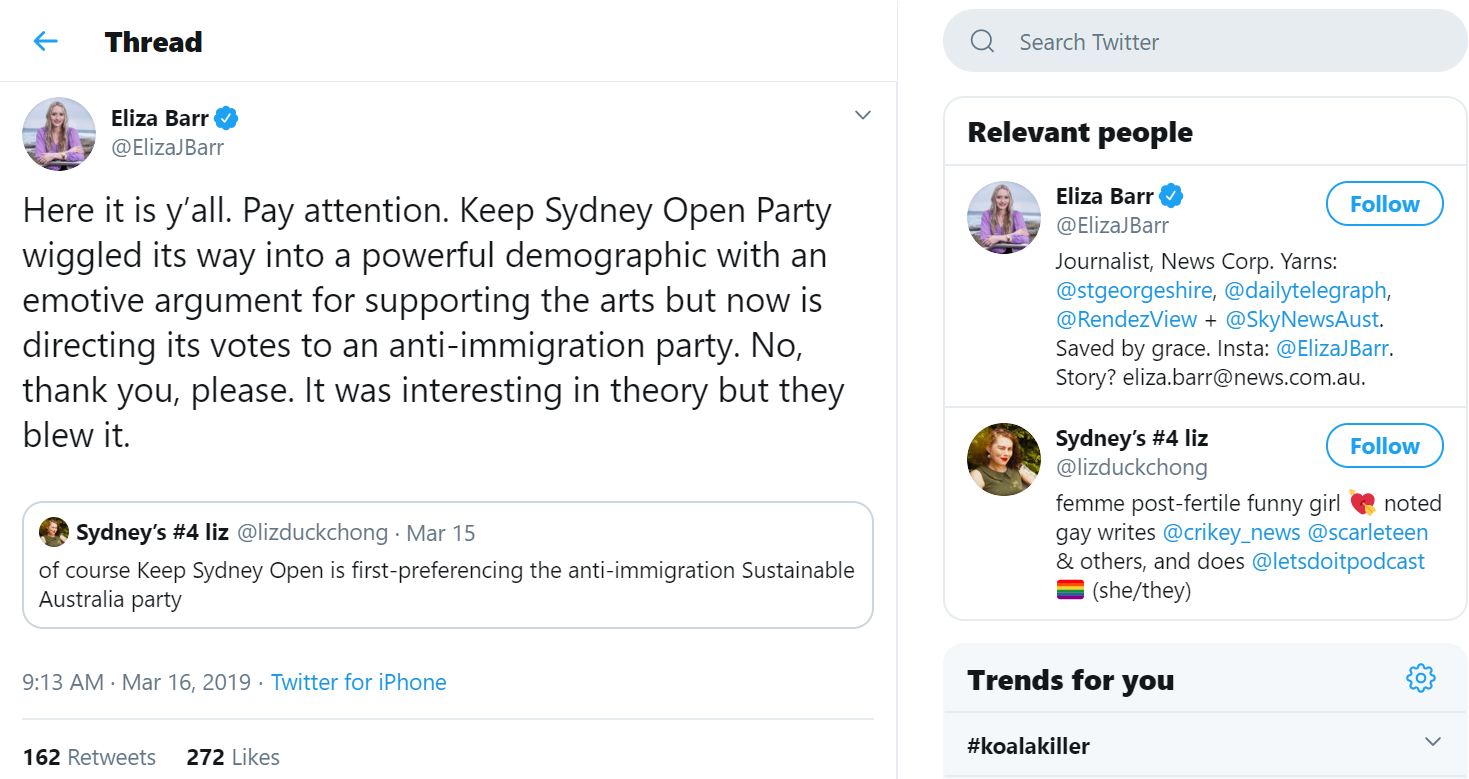 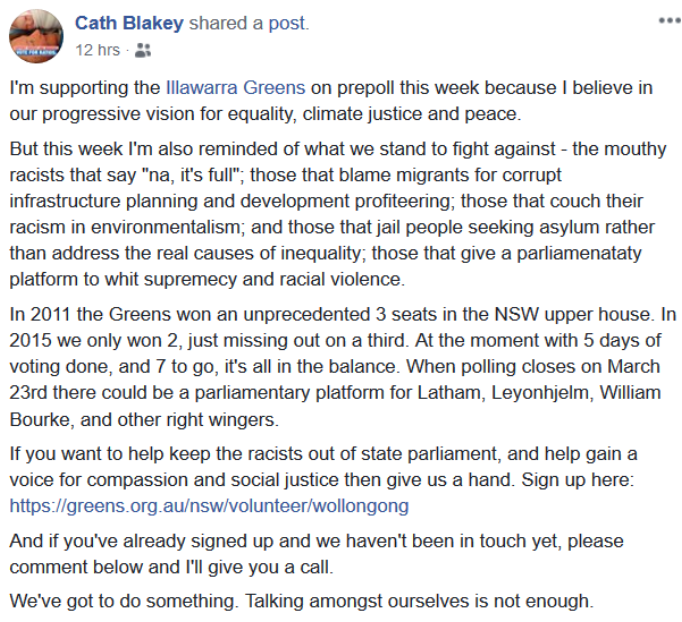 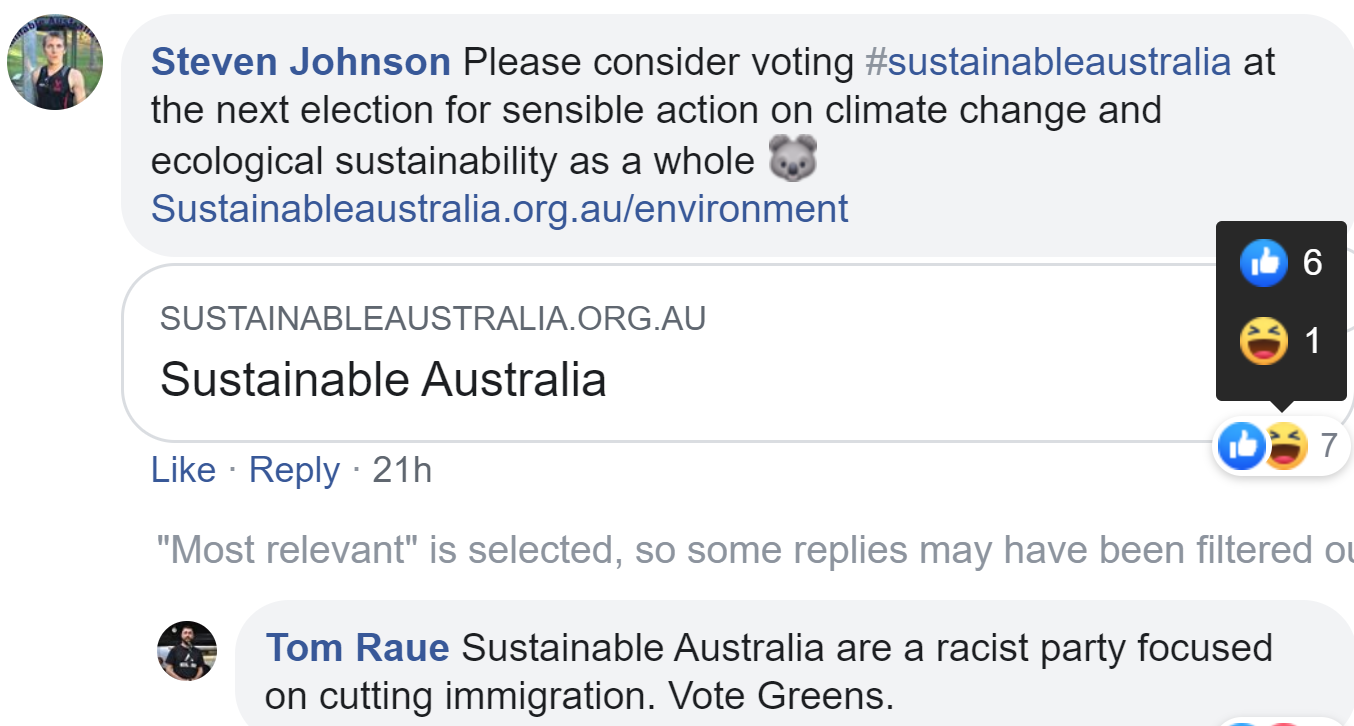 Again, these types of malicious smears are baseless, but have damaged our party's capacity to gain broader mainstream media coverage (the party is largely 'de-platformed' - i.e. denied awareness-driving coverage despite many media releases and approaches to journalists) and therefore broad media exposure and awareness.

Whilst population is just one of more than 20 policy areas covered by Sustainable Australia, it is an important issue that needs a rational and mature debate, particularly if we are to seriously address issues like overdevelopment, climate change and water shortages on the Earth's driest inhabited continent. We in no way blame migrants themselves for the rapid population growth policies of political parties - and are proud to have migrants from every inhabited continent on Earth as members of our party!

It’s time to stop the politics of smear.

Please join our fight to protect our environment, stop overdevelopment and stop corruption.

Please share this article in social media in response to any online misrepresentations of Sustainable Australia Party in the future.