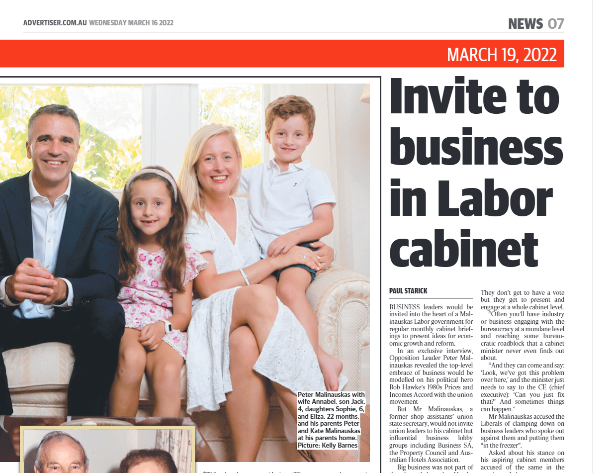 SA Party, running for the Legislative Council, strongly objects to Labor leader Peter Malinauskas’ revelation that he would invite influential business lobby groups including the Property Council to cabinet briefings to influence public policy, yet exclude unions and community groups.[1]

“The community is losing faith in politics and trust is at an all-time low. At a time that we need to prioritise trust, transparency and democracy in governance, particularly to help stop corruption, Labor leader Peter Malinauskas is proposing to offer further special privilege for the big end of town. This leads to the perception of corruption and further erosion of trust in politicians,” says Elise Michie, SA Party candidate for the Legislative Council.

“The whole South Australian community should have equal access to our politicians. If elected, we would immediately push to restore and enhance investigative powers to the Independent Commission Against Corruption SA. Further, we would immediately ban all political donations from property developers and reform the planning system to return planning powers to local communities and Councils. As part of this, we would implement a local community citizen jury system to determine major property development outcomes such as the iconic former Le Cornu site on O'Connell Street in North Adelaide.

“To stop overdevelopment and corruption, we need to put people and the environment before property developer profit,” Ms Michie added.