Posted by William Bourke 10150sc on · Add your reaction 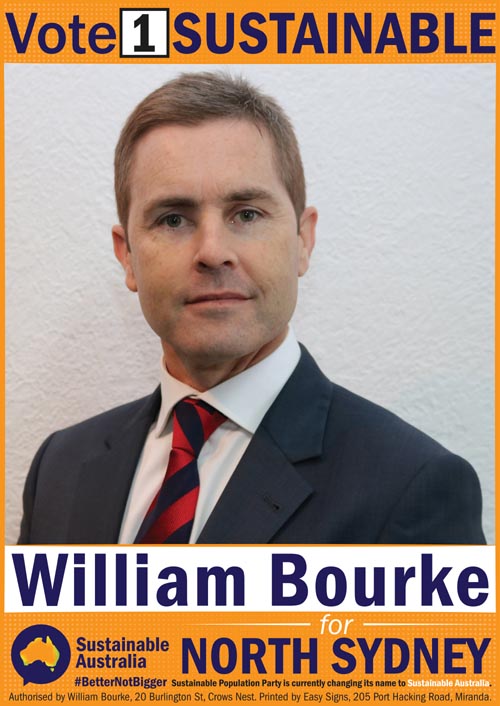 “Our party head office is located in the electorate, so I’m really looking forward to speaking with as many residents of North Sydney as possible. In particular, there are a number of key issues I will be campaigning on for the people of North Sydney, including health care and protecting the Royal North Shore Hospital, education places for all, housing affordability, stopping overdevelopment, and to make all that possible - a sustainable population policy for Australia.

"Australia is at a crossroads. Our health system is groaning under an ever increasing patient load, our roads are clogged with cars going nowhere, while our schools can no longer meet the demand for places from local families. Secure employment and housing affordability have become grim jokes for our young people and our environment is under siege from overdevelopment and pollution.

"Yet the response of the mainstream political parties is to grow our population faster than ever, with an immigration rate three times higher than the average of the last century. The current immigration intake of over 200,000 per year has Australia on track for a population of over 40 million by 2050.

“I have completed two business degrees and have experience in finance, federal government corporate communications and many years in small business. I am equally concerned about economic, environmental and social issues, which are all inherently linked.

Sustainable Australia stands for an Australia that is better, not bigger. Sustainable Australia will reduce our immigration intake back to the long term average of the 20th century, at 70,000 per annum, putting us back on track for a sustainable population, prosperous economy, healthy environment and a better quality of life.

“I regularly enjoy the outdoors including running and bushwalking in Sydney's national parks where it is possible to see our magnificent native wildlife including goannas, wallabies and kookaburras. I appreciate that past generations made the effort to preserve this for us to enjoy - and to protect other species. I want to ensure we pass on our quality of life to future generations.

“I have never been a member of another political party and as the leader of our centrist party, I’m proud that we attract many high quality people from a broad range of voting and political backgrounds.

"Our members and supporters have one thing in common - they all want an Australia that is better, not bigger." said Mr Bourke.| ENDS