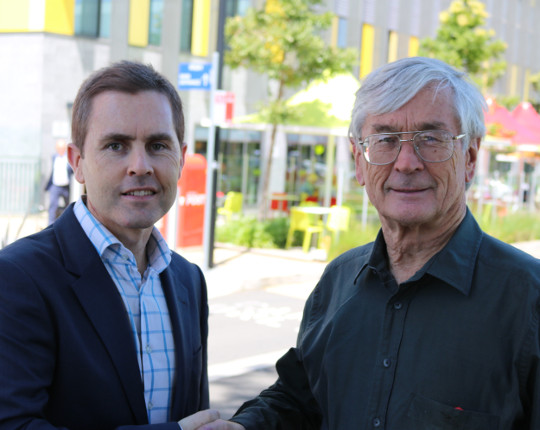 Dick Smith has joined a political party for the first time – the federally registered Sustainable Australia – and will be helping the party register for the NSW State election.

There is great synergy between Dick Smith and Sustainable Australia, with a shared call to lower Australia’s record annual immigration intake from over 200,000 back to the long-term average of 70,000. This would have no impact on the refugee intake of around 14-20,000.

“We’re delighted that after seeing our NSW campaign video, Dick Smith decided Sustainable Australia would be the first political party he would ever join. Like me, he is sick of politicians stuffing up and selling off our country,” said William Bourke, President of Sustainable Australia.

“Our grassroots party formed in 2010 to focus on real issues like secure jobs, affordable housing, better planning and a sustainable environment. None of those goals are achievable unless we address Australia’s rapid population growth. We need to urgently lower immigration from the current record level of over 200,000 per year, back to the long-term average of 70,000. There was no mandate to increase immigration so dramatically and Sustainable Australia is calling for a national plebiscite on our immigration level. Our target should be well under 30 million at 2050, not over 40 million. We need a democratic and sustainable population policy.

“We’re now launching our NSW State party and need more people to join the party so we can register. With the backing of Dick Smith and promotion through his Dick Smith Fair Go movement, we are confident we will soon register and win seats in both the Federal and NSW Parliaments.