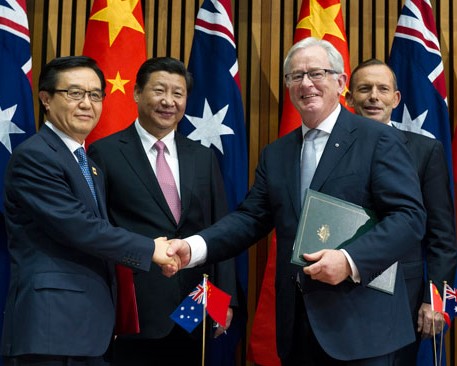 Five years ago, along with being the Federal Labor Member for Wills, I was the Deputy Chair of the Federal Parliament’s Joint Standing Committee on Treaties. In that capacity I wrote a Dissenting Report opposing ratification of the China-Australia Free Trade Agreement.

I pointed out a series of major flaws in the agreement:

- It opened the door for Chinese companies to bring in their own workforce, referred to as “contractual service providers”, instead of hiring local workers.

- It had an Investor-State Dispute Settlement Provision, increasing the power of Chinese corporations at the expense of our democratically elected Government.

We were told in 2015 by the Abbott and Turnbull Governments that these and other serious flaws should be overlooked because of the benefits the Trade Deal would bring by way of increased Australian exports into China.

Recent developments have made clear that this claim was totally hollow. The China-Australia Free Trade Agreement has been utterly useless in protecting Australian businesses and exporters from the bullying of a Chinese Government which makes no serious attempt to disguise the fact that it is using its trade power to pursue political objectives.

The Trade Deal has had no deterrent effect whatsoever. The Chinese Government has imposed tariffs and restrictions on Australian imports at will. The Australian Government has hinted that it might take the matter to the WTO, but such hints are of little value to Australian exporters, who are suffering right now.

The solution is certainly not for Australia to capitulate to this bullying. We should stand up for human rights wherever they are at risk – whether that involves Tibet, the Uighers, Hong Kong, or, yes, Afghanistan.

The solution is for Australia to become more self-reliant and more self-sufficient. The China Trade Deal and others have come at the expense of our self-sufficiency, and now our sovereignty is also at risk. The short-sighted and greedy preachers of globalisation have failed to see the folly of making our economy narrow and vulnerable.

We need to withdraw from the China-Australia Free Trade Agreement, and seriously support Australian manufacturing and Australian made.