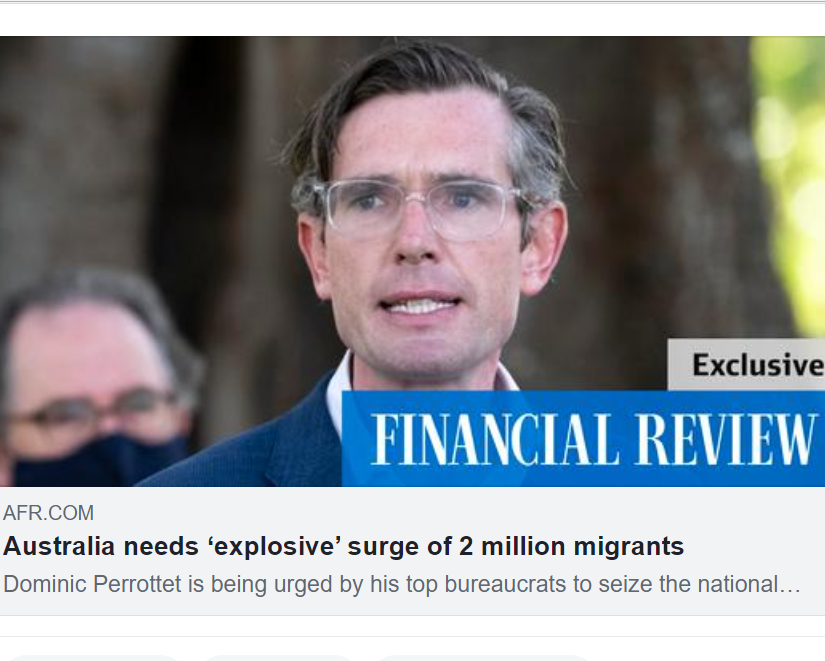 New South Wales Premier Dominic Perrottet must rule out proposals for an “explosive” immigration surge which would bring in 2 million extra migrants over the next five years.

He has been given this advice by his Department of Premier and Cabinet. New South Wales voters, some of whom will soon vote in upcoming By-Elections, are entitled to know what he intends to do with this advice.

In the 20 years since 2000 Australia has added 7 million extra people and cleared 7.2 million hectares of threatened species habitat. A hectare of clearing for every extra person. This could be a co-incidence, but I don’t think so. I think it is entirely foreseeable that an extra 2 million people will lead to the clearing of another 2 million hectares of threatened species habitat.

Not only will 2 million extra people be an environmental disaster, it will be a disaster for young Sydney-siders. For the first time in years the Reserve Bank and leading economists have seen signs of wages growth and increasing job opportunities for young people. The “explosive” two million extra people would detonate those opportunities, blowing the chances of young people to have secure full time jobs right out of the water.

Mr. Perrottet must quickly pull the pin on this “explosive” Population Ponzi scheme.