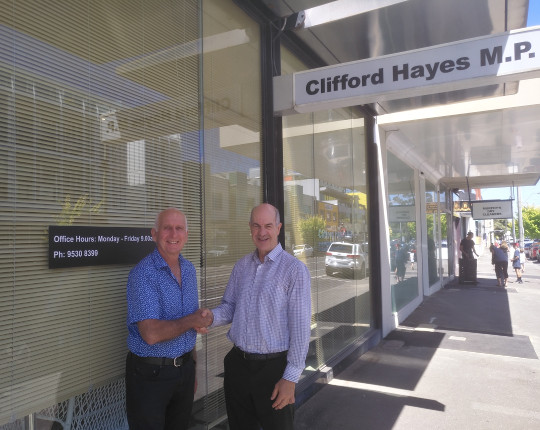 Mr Thomson served as an Australian Labor Party Councillor for the City of Coburg from 1981 to 1988, Member of the Victorian Parliament for Pascoe Vale from 1988 to 1996, and Federal Labor Member for Wills for over 20 years from 1996 until the 2016 Election.

Mr Thomson will be advising Sustainable Australia’s first elected Member of Parliament, Mr. Clifford Hayes, who was elected as a Legislative Councillor for the Southern Metropolitan Region at the recent Victorian election.

Mr Hayes said, “Kelvin Thomson’s knowledge of all three levels of government, his campaign experience - he stood for public office 12 times in his career and was successful on each occasion - and his policy development expertise, having been a Shadow Minister for the Environment amongst other Shadow Ministries, Parliamentary Secretary and member of many Parliamentary Committees during his parliamentary service, will make him an invaluable asset to me, my office and to the Sustainable Australia Party.

“For a decade now I have set out what I believe to be the myopia, greed, vanity and ecological illiteracy that drives Big Australia, Australia's policy of rapid population growth. I have arrived at a point where there are irreconcilable differences between the course I believe Australia and the world needs to chart, and the course that the Australian Labor Party is charting. I set out in my Valedictory Speech my great appreciation of the support I received as an MP from ordinary members of the Labor Party, and those sentiments remain true. I retain a hope that in time the Labor Party will embrace views about Australia's population that are more in keeping with the needs of this generation, the needs of those who will come after us, and the needs of the many other species we have the good fortune to share this ancient, beautiful and fragile country with.

"What this world needs now is not more people, but more courage."

Sustainable Australia Party Founder and President William Bourke said, "Kelvin Thomson played a key role in kick-starting the population debate in Australia 10 years ago, with a speech he gave in Parliament in August 2009, and with a media release he put out in September 2009, in response to Treasury figures showing that Australia's population would be 35 million by 2049, a massive jump from the previous projection of 28 million by 2049, made just a couple of years earlier. He described this as a recipe for environmental disaster and called for population reform."

"The Sustainable Australia Party, formed in the wake of that debate, is a party of the political centre, and Kelvin and other mainstream, like-minded Australians are very welcome here."