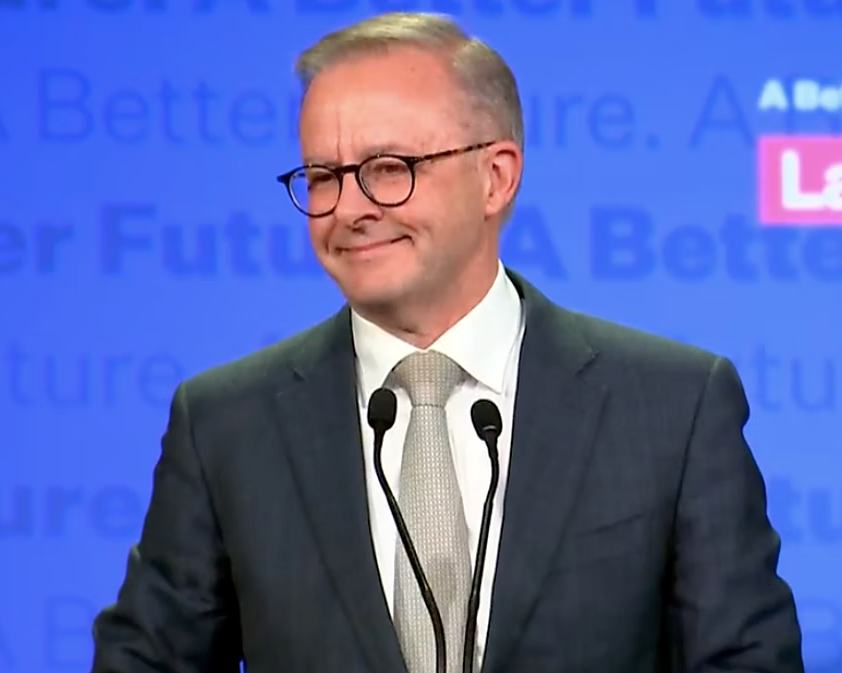 Congratulations to Anthony Albanese and the Australian Labor Party on its decisive win in the 2022 Federal Election.

Many Australians are welcoming the change as an opportunity to tackle important public policy issues that have suffered from years of neglect. For me, there are 5 clear take home messages from the election campaign and the results.

The results in Western Australia, and to some extent also in Victoria, are a striking demonstration of the fact that the public expects its leaders to put public health first, ahead of economic considerations. In Western Australia, Mark McGowan’s strong stance protecting the Western Australian people from the coronavirus pandemic not only saw him monster the Liberal Opposition in the State election, it also rubbed off on Federal Labor. Labor in WA achieved much larger swings than in other States, helped by the Liberals and Nationals who foolishly thought it was smart politics to attack McGowan.

To some extent the same thing happened in Victoria. The Liberals like Senator Jane Hume who said they thought Dan Andrews “would be more of a factor” are seriously out of touch. The Liberal Party in Victoria has been hunting with the libertarian “anti-mask, anti-lockdown, anti-Vaxx” crowd, and apparently just doesn’t get that this is not what a majority of voters want. Their “Dictator Dan” rhetoric works alright in their small bubble, but doesn’t travel well beyond it.

I think the Morrison Government handled the pandemic well in 2020, and overall Australia has done much better than other countries. It could have been a plus for the Government. But it would seem that the Liberal Party was unwilling to hold the line on putting public health first, and the public support they built up during 2020 over this issue melted away during 2021 and 2022. Whether this was because of pressure from business, or libertarian ideology, or a misreading of the public mood, or a combination of all three, is a moot point. The slow vaccine rollout, the inadequate response to the Delta and Omicron variants, and the attacks on the Labor State Premiers, turned the issue from a winner into a lose.

Finally, over 20 years of inaction and opportunism, dating back to John Howard’s refusal in 2001 to ratify the Kyoto Protocol on Climate Change, to do a favour for then US President George W. Bush, have caught up with the Liberal Party. The climate change chickens have come home to roost. Voters right across the country, seeing the extreme weather events, the fires and the floods, of the past few years, are demanding action. No longer is it possible to dismiss these disasters as “one in a 100 year” events. The poor response of Prime Minister Morrison to these climate disasters came ultimately from his embarrassment at having to go to places that were suffering as a result of climate change - it is an issue the Liberal and National Parties have steadfastly refused to take seriously.

They are now losing seats to Independents and even to the Greens as a result. It is not just in inner Sydney and Melbourne where their position is untenable. Queensland used to be an anchor on action to tackle climate change. Not any more. If the Liberal Party is to remain relevant in the 21st century, it needs to face up to the need for action now to cut our greenhouse emissions. Australia, which has much to lose from inaction - whether it be fires, floods, droughts, or coral bleaching - needs to be a leader. The cuts need to happen now, not at some point 5, 10 or 30 years into the future, and voters know it.

The Government’s failure to deliver the Anti-Corruption Commission it promised prior to the last election was a major blunder. It was a very significant factor in the wins by a number of “Teal Independents”. I bet Prime Minister Morrison wishes he had his time over again on this one. It was an issue I raised a number of times before I left the Parliament. The message for both the incoming Labor Government and for the Liberal Party is that people want a Commission with teeth. Australia has been slipping down the Transparency International rankings of country-by-country integrity. This needs to stop.

I hope the Teal Independents pursue, and achieve, a ban on campaign donations by property developers. There are bans in place in New South Wales and Queensland, but the absence of a federal ban on donations leaves a loophole so big it can be seen from space. And the Victorian IBAC has uncovered wrongdoing at Casey Council that indicates that Victoria desperately needs a ban as well.

It was noteworthy that the successful Teal Independents were all women. It is clear that there is an appetite for more women MPs. It is probably doubtful that a male “Teal Independent” could have defeated Tony Abbott in Warringah at the last election, as Zali Steggall did, or defeated Josh Frydenberg in Kooyong and Tim Wilson in Goldstein this time, as Monique Ryan and Zoe Daniel appear to have done. It is also noteworthy that the successful campaigns by male Independents in the Lower House in the past, eg Ted Mack, Peter Andren, Tony Windsor and Rob Oakeshott, did not seem to generate community movements. However the successful campaigns by independent women candidates Cathy McGowan and Zali Steggall, motivated by community despair at their obnoxious right wing anti-environment MPs Sophie Mirabella and Tony Abbott, have triggered a wider movement.

The Labor Party has largely insulated itself from this phenomenon with its affirmative action rules, but clearly the Liberal Party will need to put up more women candidates in future. It seems foreseeable that in the years ahead the percentage of women in Australian Parliaments will indeed exceed 50%, and it may well stay there for an extended period of time.

Young voters are not supporting the Liberal Party. This is not particularly new - young people always tend to be to the left of older generations, and I grew up in the shadow of the Vietnam War, where war and conscription caused young voters to shy away from the Liberal Party. However, the phenomenon is increasing, and it is not clear to me that the Liberal Party has any way to address it. The overall good shape of the economy doesn’t do justice to the way young people struggle with job insecurity, low wages, and housing unaffordability. Key Liberal Party philosophies - globalisation, deregulation, privatisation, high immigration to keep wages down and increase consumers - all work against the interests of young people. I don’t see any willingness within the Liberal Party to revisit the era of its founder, Robert Menzies, when a strong manufacturing and public sector created genuine economic security. The National Party demands they do the trade deals that give away their capacity to have these things. But unless they do, their support among young people will continue to erode, and their long-term relevance will be in some doubt.

Labor and the crossbench

Needless to say, for the incoming Labor Party and the Crossbench, the future looks considerably brighter. They will have to address the voters’ expectations of real action on climate change and on political integrity, but climate change should not be as fraught as it has been in years gone by. It is important that they take action on a year-by-year basis, rather than postponing it into the never-never, as has happened in Australia for the past 20 years.

The economy is in good shape, with unemployment and underemployment at record lows. The task will be to keep it that way, and build our economic sovereignty and resilience. Housing affordability is a key concern, and it is high time our levels of home ownership started to rise again after years of decline.

The Labor Government will not be confronting an array of hostile Premiers, as the Whitlam Government did. Furthermore, it is likely that the Liberal Party will enter into a period of infighting and soul-searching, and be a diminished opposition. Although it has been in power Federally for all but 6 years of this century, the Coalition now finds itself in opposition everywhere except for New South Wales and Tasmania. Demographics are not on its side, and it is well to the right of public opinion, with no obvious way of recapturing the middle ground.

While there is clearly a public mood for “third way” parties and candidates, the Sustainable Australia Party does not have the financial resources to mount the campaigns that could take advantage of this mood in federal elections. At this stage we therefore use federal elections as awareness-raising exercises to help us in our 'winnable' elections - state and local government elections.

Both issues that the “Teal Independents” campaigned on, climate change action, and integrity in government, are core issues for the Sustainable Australia Party, and have been for years. However wealthy businessmen like Clive Palmer and Simon Holmes a Court were much more able in a federal election to ensure that their message was heard. They did not depend on media coverage. Indeed, the sheer volume of money they were spending itself generated media coverage.

Our electoral prospects are brighter at the forthcoming Victorian and New South Wales state elections, where we will focus our resources on winning Upper House seats. The task will be to both promote clear cut through messages that resonate with voters, and effectively mobilise our supporters, to retain and build on our Parliamentary representation.