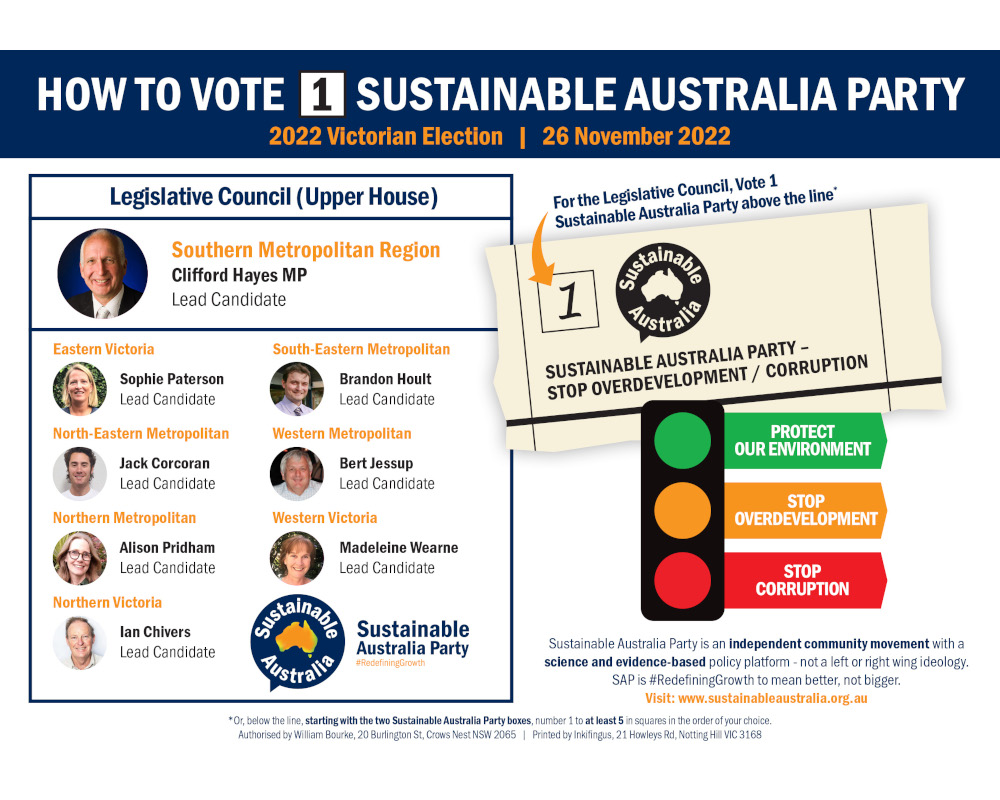 The Victorian State Election will be held on Saturday 26 November.

The Sustainable Australia Party’s key objective in the Victorian election is to secure the re-election of Clifford Hayes as our MP in the Legislative Council (Upper House) representing the Southern Metropolitan Region. Since being elected in 2018, Clifford has done a fine job in campaigning against overdevelopment, campaigning against corruption, supporting heritage protection and the environment, and fighting for residents to be given a genuine say in planning issues.

His task has been made difficult because the Government could rely in the Legislative Council on the votes of the Reason Party, Animal Justice Party, and Greens, meaning that they did not require his support for legislation, and could get away with ignoring his calls for important environmental and planning reforms. We hope both that he will be re-elected, and that the make-up of the next Legislative Council will give him greater opportunities to pursue our agenda of stopping overdevelopment, stopping corruption, and protecting our environment.[1]

The Victorian Legislative Council is divided into 8 Regions, with 5 candidates elected for each region. This means the quota for election is 16.67% of the vote. Such a quota makes it very difficult for any minor parties or independents to be elected in any region.

It is noteworthy that in the past 20 years the combined vote of the major parties has been relentlessly falling, not just in Victoria but right around Australia and indeed around the world. But the Legislative Council voting system seeks to paper over this drop in support. It means that minor parties and independents could collectively get 20-30% of the vote, and have no representation at all.

Is this democratic? No.

Against that background, minor parties seek to achieve representation in the Victorian Legislative Council by working together with other minor parties and independents, and preferencing them ahead of the major parties in the compulsory 'group voting ticket'. This does not bind our voters or supporters. While our supporters can vote "above the line", our supporters can also quite easily decide how they want to distribute their preferences by voting "below the line" instead.

Even though the current group voting ticket system is imperfect, it provides a chance for more diverse views in the Parliament when minor parties and independents pragmatically work together to support each other’s election. Remember, the Victorian Upper House voting system was created and implemented by the major parties. Minor parties and independents are simply trying to level the playing field.

This system does away with the need to exchange preferences in order to get a candidate elected. It enables minor parties to issue "open" How to Votes which make no preference allocations. This is what the Sustainable Australia Party normally does and again intends to do in the forthcoming March 2023 NSW election.[2]

1. Anyone wishing to support the Sustainable Australia Party in the Victorian election can register to do so here in our Volunteer page.

2. Remember, voters can easily choose their own preferences in the Victorian election by voting below the line on the Upper House ballot paper.